Diabetes is a growing problem in South Africa, but this disease affects South African Indians with three times greater risk than other race groups. In addition, Diabetes and Ischaemic Heart disease occur at least a decade younger in Indians than in other populations in South Africa. Both these diseases are the leading cause of death within the Indian population.

Apart from poor diet and exercise there is a genetic component that leads to increased disease risk. Suspect genes are linked to increased risk of disease in certain ethnic groups. Very little genetic research has been performed on the South African Indian population. Researchers at KRISP (KwaZulu-Natal Research Innovation and Sequencing Platform), a new state of the art research center within the Nelson Mandela Medical School, have recruited world leading experts (including many South Africans who have spent decades out of the country in leading international organizations) to take on the task of decoding the South African Indian genome for Diabetes and Heart disease risk.

Using new technology available at KRISP, Beijing Genomics Institute (BGI) and SAMRC, researchers plan to use an individual’s DNA to identify genetic markers that could predict the risk of disease. One of the secondary aims of this project is to sequence the whole genomes of prominent Indian South Africans that have made significant impacts in the fields of Science, Sport, Business and Media; a similar strategy used by the Human Genome Project that sequenced the scientists who decoded the structure of DNA in the 50s (Sir Francis Crick and Sir James Watson).

The main aim of the Business Breakfast is to promote awareness of the leading causes of mortality in Indians; and give the opportunity to successful individuals to make contributions to this exciting project and have their own genomes sequenced! This project will be supported by leading South African scientists, sporting icons, business leaders and media gurus.

Diabetes and Heart Disease pose a significant economic burden. Global projections show that diabetes alone, is set to reach 592 million in 2035, with the sub-Saharan African (SSA) region bearing the brunt of this increase and South Africa at the forefront with the greatest impact on the Indian population.

The costs of type 2 Diabetes are partly direct, such as hospital and medication costs and disability grants incurred by individuals, families or governments, and partly indirect, via work absenteeism, time spent caring for sick relatives, and reduced productivity.

About 76% of diabetes deaths in SSA occur in people younger than 60 years old, the most economically active demographic segment of the population.

Research has shown diabetes affects patients, employers, and society not only by reducing employment but also by contributing to work loss and health-related work limitations for those who remain employed. Join the UKZN Foundation to learn more about this research from a world renowned scientist, Professor Salim Abdool Karim. 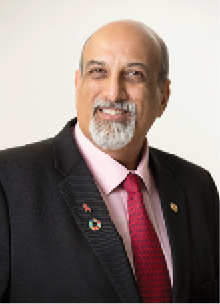 Prof Salim Abdool Karim is a clinical infectious diseases epidemiologist who is widely recognised for his research contributions in HIV prevention and treatment.

His clinical research on TB-HIV treatment has shaped international guidelines on the clinical management of co-infected patients. He was co-leader of the CAPRISA 004 tenofovir gel trial that provided proof-of-concept that antiretrovirals can prevent sexually transmitted HIV infection and herpes simplex virus type 2 in women. He is co-inventor on patents which have been used in several HIV vaccine candidates and in passive immunisation strategies with broadly neutralising antibodies.